In the blog post for our June project, designed by bulthaup Sagaseta in Pamplona jointly with MLMR Architecture Consultancy, we pointed out that the oak flooring acted as a narrative thread connecting the different spaces in the home, extending all the way into the kitchen. We also mentioned how the bulthaup wood veneers contributed to that transition between different spaces and functions, creating an intermediate area between the kitchen and the central dining and living space, and highlighting it with the warm reddish shades of apple wood and the delicate light hue of oak.

Given our customers’ frequent preference for white and light colors in the kitchen, the use of wood as a contrasting accent within this space and in the transition areas connecting with other rooms is becoming increasingly prevalent.

From living trees to living spaces

The most creative material in the world is growing, almost without our help, and it’s doing so in complete silence. It’s a material that leaves the living quality of all other materials far behind: wood. Wood is a piece of nature. It breathes. It lives. It radiates comforting warmth, has a positive impact on the room’s atmosphere, and offers unlimited design options. With its grain, color, warmth and texture, the wood we live with stimulates our senses. And in these fast-changing times, it soothes our longing for calm. High-quality wooden furniture moves with you, and often develops into favorite heirlooms for generation after generation. Maybe it’s because it can tell stories? Haven’t we all stood at some point in front of a secretaire, touching its inlay work lovingly and thinking how much this old piece of furniture must have seen, heard and experienced during its lifetime?

A material with a character of its own

Wood is like us –individual. No two pieces of wood are alike, not even wood of the same type. As a result, furniture bears the unmistakable mark of the tree from which it was made. And that’s what stimulates and inspires bulthaup to do justice to this vitality with its furniture. It’s a process that involves searching for that special character and expressing it fully in the kitchen. Underlying it all is our love and respect for wood.

The path from the tree to the kitchen is a long one. But at bulthaup, it doesn’t lead through a deep jungle or a tropical forest. We only use cultivation areas that are managed sustainably. After all, you don’t have to go to the ends of the earth to find wood. It can actually be right under your nose – such as elm, apple and Swiss pear.

An endless range of woods

The elm used to grace classical sideboards until the wood finally became scorned as “conservative” and drifted into oblivion. Added to this was the fact that Dutch elm disease was also felling most elm trees. Today, the elm has once again reclaimed its position in contemporary design, for example, offering a sensuous gray or russet hue next to a stainless steel surface. The wood of the apple tree also sets stunning accents. In the orchard, it’s an everyday occurrence. But in the home, it’s still rather exotic. That’s because its veneer is extremely difficult to process. This brittle, uneven wood requires expert skill. But it’s worth it, since with careful craftsmanship, the apple tree can enrich any living space. Each front is a unique piece, an exciting contrast between fiery-dark and fine-grained light components.

bulthaup also uses the wood from another fruit-bearing tree: the Swiss pear. Because of the climate conditions and the fact that they grow wild, these trees from Eastern Switzerland feature a lively, straight grain.Cabinetmakers have always been enthralled by this wood, which is completely different from conventional pear wood. In the 1950s, Swiss pear was so scarce that it was almost impossible to get hold of. A replacement was searched for –and found– in the related service tree. Its warm-colored grain is indistinguishable from that of the original pear tree from Switzerland. And that’s why service trees have become known in the trade as Swiss pear trees.

An Asian version that features a natural and high-quality appearance is bamboo. With a velvety-matte surface, it creates a thin, striped veneer with knots known as nodes.

American walnut is a beautiful hardwood with a regular, fine grain and a delicate natural greyish brown hue. At bulthaup, a special natural wood varnish –containing a type of light protection factor–protects the veneer against the effects of light and preserves the walnut’s delightful feel. 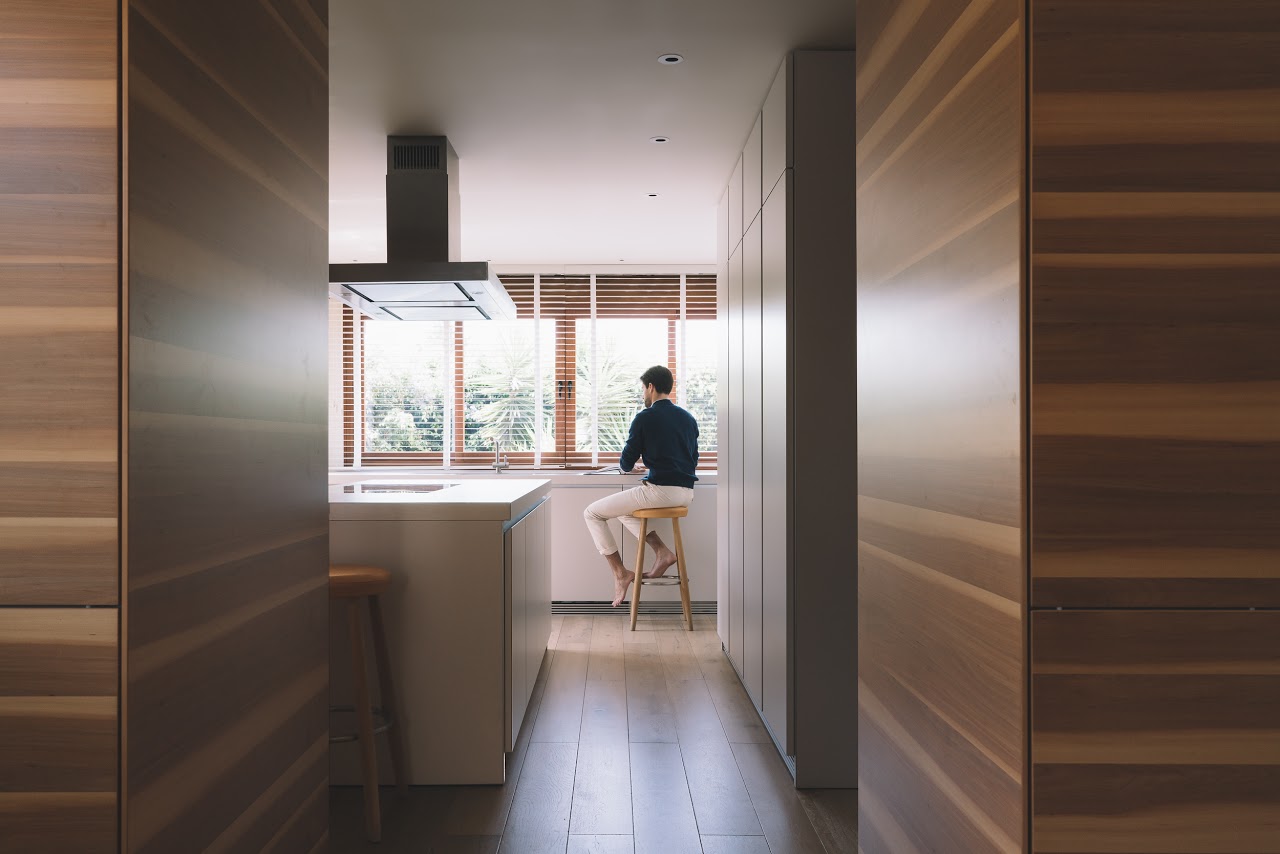 The quality of bulthaup veneers

The outstanding quality of the veneers that bulthaup produces in its effort to make the best use of these natural materials guarantees the best result.

Given that the characteristics of wood vary according to the climate and the soil the tree grows in and how it is planted, its color and grain is never even: each trunk is totally unique. Even so, to maintain the greatest possible consistency among the materials used for each project, the expert craftsmen at bulthaup work with the utmost precision in selecting, storing and treating the wood, fine-tuning their skill over the years.

bulthaup’s master veneer craftsmen select the wood sheets from the consecutive packages cut from the same tree trunk. For custom-made veneers, such as the tall apple wood units in the bulthaup Pamplona project, they draw up a diagram of the entire surface, and then use it as a cutting pattern for the cabinetmaker.

The color range of apple wood

The variations in color and grain within a single tree trunk are the basis for the unique character and the natural look of the resulting cabinets. In the case of apple wood, since apple trees never grow to a large size, bulthaup uses their highly-valued, dense, brittle wood in bands that create a planked effect with warm contrasting colors.

In the bulthaup Pamplona project, the C3 long bench and table –both made of highly resistant yet thin and graceful panels that appear to be floating in the air– offer a counterpoint to the tall apple wood units, ushering the way into the lighter-hued kitchen with a sand grey lacquered finish. The circle comes to a close with the warmth of natural light.

The workbench can be all of the above or only a part: as it is made up of individual modules placed between two clamping jaws, the user can choose one or several.

With your consent, we would like to use the Facebook Pixel. All information about this, as well as the option to withdraw your consent, can be found in our data Data Privacy Notice.

I consent to the use of the Facebook Pixel. OK