The entire creative process flows smoothly if the setting is right. The bulthaup b2 workbench provides order and serenity as the functions of preparing, washing, and cooking are lined up in a sequence of surfaces; it can also be adapted to include a surface for people to gather and connect, a place where family and friends can sit down to keep the cooks company, help them with their tasks, and enjoy sharing the final result of their efforts.

The workbench can be all of the above or only a part: as it is made up of individual modules placed between two clamping jaws, the user can choose one or several, depending on his or her particular needs and preferences, and select a sequence of materials–stainless steel, natural stone, or solid wood.

The flexible sealing profile placed between the modules–an exclusive bulthaup design–guarantees watertight joints that are easy to assemble and disassemble. Water, gas, and electric power connections are gracefully concealed with aluminum-colored flexible tubing. In addition, the clamping jaws at both ends of the workbench are equipped with a functional gap that can be used to hang utensils and containers, keeping essential items close at hand at all times.

A long history of mobility

The first kitchen workbench that bulthaup launched in 1988 was utterly revolutionary: in the midst of the trend of converting industrial spaces into lofts, bulthaup offered a highly mobile, flexible element that included all the essentials of a kitchen in one single unit. Decades later, the Vienna-based design group EOOS reinterpreted the workbench as part of its analysis of archetypal images, customs, and age-old rituals that led to the development of the b2 system, for which mobility and adaptability continued to be key factors.

Given its high versatility, the b2 workbench comes alive in many different ways. Interior designer and bulthaup customer Agnès Blanch tells us how she chose to configure her workbench and her reasons for doing so. 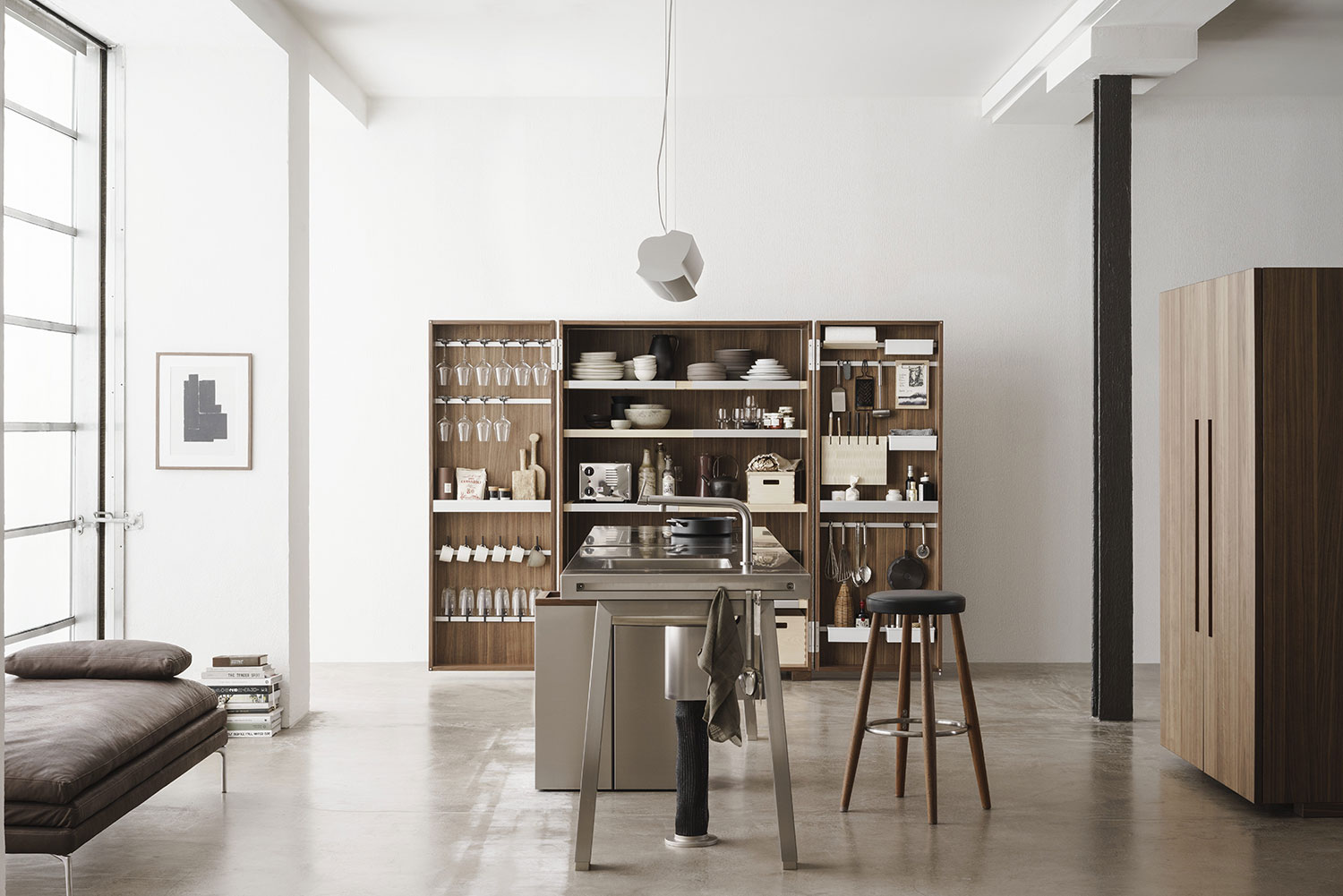 When interior designers conceive the spaces for their own homes, there are no longer any excuses, distractions, or concessions to their clients. It is their chance to hone down their reasoning, their aesthetic preferences, and their rationalization of functionality in order to shape the surroundings in which they envision themselves living for years to come. This was the case for Agnès Blanch when she was deciding how to overhaul the penthouse where she now lives in Barcelona. She knew she wanted to have an open-plan space, with no architectural barriers between the kitchen and the dining and living areas. After considering several options, Agnès found one of them increasingly convincing: a bulthaup b2 workbench to join the two areas, providing a surface for cooking, one for preparing, and a third one for eating, all in a smooth sequence of utmost simplicity and elegance. Although the bulthaup b3 units against the two kitchen walls house all the storage space, the water point, and most of the appliances, the place where the action really happens is there—in the juncture between spaces embodied by the workbench.

We asked Agnès about her decision-making process and its outcome.

What combination did you choose among the available options?

What were your reasons for choosing the workbench instead of a more conventional kitchen?

I chose it for its sculptural, light character, being an open structure with legs instead of a conventional kitchen island. I also wanted a kitchen that opened up seamlessly onto the living area as part of a whole. I wanted the island to merge with the living and dining room furniture rather than being part of the kitchen. That’s why I did away with the image of an extractor hood, downplaying the presence of the cooking area.

What does the b2 workbench feel like in your everyday life?

It provides us with the perfect setting for many moments with our friends and our other family members. The kitchen has become part of our everyday lives.

Do you remember the first day you used your b2 workbench?

My daughters Blanca and Ada decided to celebrate the occasion making baby eels with French fries; they did the cooking. I loved it.

What aspect of the b2 workbench’s modularity and flexibility was useful to you?

It allowed me to configure a continuous surface made up of three elements for different uses. 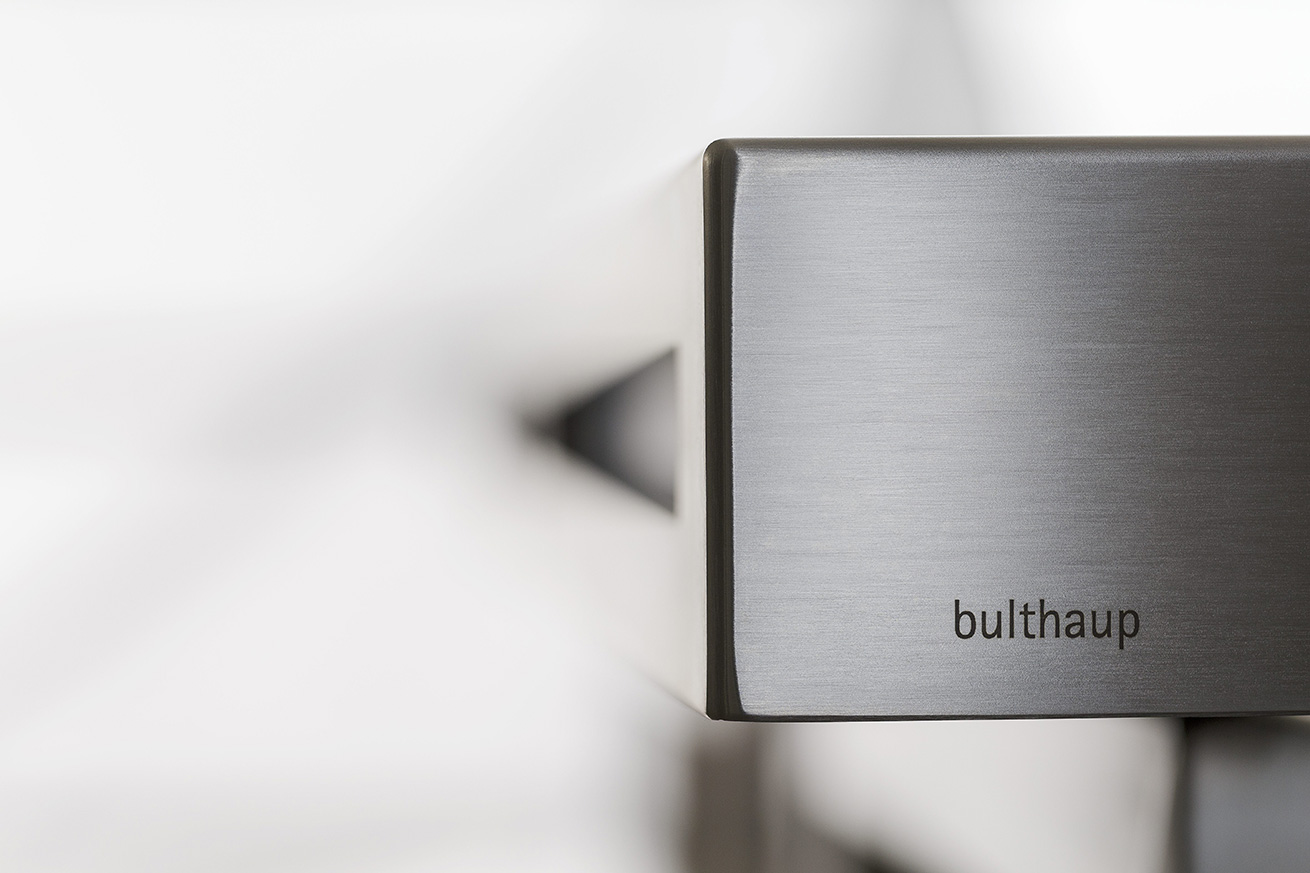 And that is where Agnès and her family continue to cook together, chat, share breakfast and dinner. It is also where she sits in silence at other, solitary moments, feeling the heat of the teacup on her palm, her book open on the stone surface. It is where the bulthaup b2 workbench continues to stand, fully committed to its many roles.

Cookies are text files that are stored on your device by your browser for the purpose of remembering specific information. Using the information stored and returned, the website concerned recognizes that you have already accessed and visited the site with the browser on your device. Here at bulthaup, we use this information to optimally design and display our website in line with your preferences. Only the cookie itself is identified on your device. Personal data will only be stored with your express consent or, where necessary, to enable use of the service provided by us and accessed by you. Click on the various categories for further details. Here, you can also customize your preferences and revoke, for future effect, any consent granted.
Accept all cookies
Save Settings

Performance cookies collect aggregated information about how the bulthaup website is used, with a view to increasing its attractiveness, content, and functionality. These cookies help bulthaup to determine whether sub-pages of the bulthaup website are visited, how often they are visited, and the length of the visits, as well as which content is of particular interest to users. These cookies also track search terms, the country and region (and, where applicable, the city) from which the website is accessed, and the share of mobile devices accessing the bulthaup website. We use this information to compile statistics in order to tailor the website more closely to your requirements and optimize the bulthaup offering.
Accept all performance cookies
Save Settings

Functional cookies allow the website to remember information previously provided (e.g. registered username, language preference) and to use this information to provide you with more convenience by means of improved and personalized settings. These cookies only collect and store your information in such a way that your activities on other websites cannot be tracked.
Accept all functional cookies
Save Settings

Marketing cookies originate from external advertisers (third-party cookies) and are used to collect information about the Web pages visited by the visitor, the aim being to develop and display target group-relevant content and advertising for the visitor.
Accept all marketing cookies
Save Settings